“High marginal tax rates act as a brake on employment. They discourage people from taking jobs and discourage emigrants from returning home. As you all know, I have limited resources to change the situation in this Budget but it is important to continue the process I started in Budget 2015”.

Personal tax rates have been the subject of massive debate in recent times. Everyone, including Michael Noonan it seems, is in agreement that our current high rates are damaging to growth and a challenge to attracting talent into Ireland.

As was largely expected, there was little impactful change on taxes on income. The cut in USC rates is the main tax measure designed to impact on personal tax rates.

However some groups have been specifically targeted for additional tax cuts. The self-employed and company owner-directors are one of these groups. They will be benefiting from an increase to the Earned Income Tax Credit, albeit by a slightly lesser than anticipated increase. This tax credit was introduced last year to begin a process of equalisation of tax affairs between employees and the self-employed and has been increased by €400 in Budget 2017, so the value of the credit will be €950 in 2017. There still remains a €700 difference in the value of this credit to the PAYE tax credit to be addressed in future Budgets however.

In all, the challenges outlined by the Minister in relation to our personal tax rates look set to continue for some time.

If you need advice or assistance with Income Tax Returns or Tax Solutions for Contractors, get in touch on hello@fenero.ie or 01-6877400. 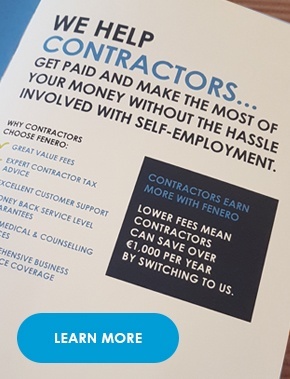